skip to main | skip to sidebar

Hanoi to Cat Ba and Halong Bay. Wish i'd bought into the tour thing...

Those following days in early January were mainly spent getting lost amongst Hanoi's bustling Old Quarter back streets and alleys and buying some decent warm clothes. Evenings seemed to be predominantly spent in Mao's place meeting various oddballs. In particular, I met plenty of english teachers from all over the world . They seem to have it quite easy in Hanoi, earning around US$20 an hour and so living like kings for doing less than a four-day week. It seemed great, but I don't think Hanoi would be the place for me were I to try out teaching. 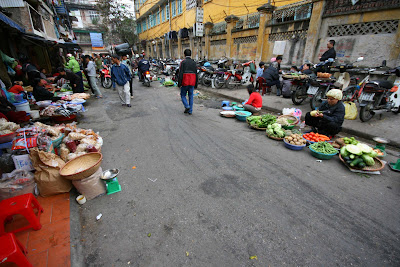 Daily markets in Hanoi
Halong Bay, a cluster of limestone karst formations that sprout out of the Gulf of Tonkin, on the north-east coast of Vietnam, is apparently stunning (a Unesco World Heritage site), so it was there that I decided to head next. This meant taking a bus from Hanoi to the coastal town of Haiphong, which I can only describe nicely as a shit-hole. From Haiphong, it's a boat journey out to Cat Ba island from where you can go on an overnight boat trip into the bay. Once I'd bought my 'special foreigner price' ticket (somewhere between five and ten times what the locals pay), I boarded the boat to Cat Ba and was soon offered to buy a strange banana-leaf-wrapped marzipan-looking concotion by a local hag with a gorgeous smile. Open to experimentation I gave it a try and was delighted to find it wasn't sweet at all but was in fact some pork/bean marriage bastard offspring (like mechanically recovered meat but which had then been allowed to rot a little in the midday sun). The locals couldn't understand my dislike for their wee delicacy but to avoid too much insult, I politely put in my bag as if to save for a future very special occasion (like a deep-sea burial). The journey skirted along the edge of Halong Bay though i just didn't feel like I needed any more attention by getting my camera out. Too many missed opportunities like this have made me give less of a shit about people's reaction when it comes down to the business of taking a mean photo. 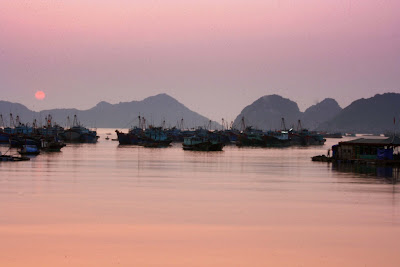 Cat Ba town harbour
The fact I was the only foreigner crammed onto the tiny boat along with 100 Vietnamese locals didn't spark any curiosity in me at the time that something might not be quite right. Three hours of standing on deck freezing and being stared and giggled at and we finally arrived at Cat Ba building site, I mean, island. Every other building in Cat Ba town was either under construction, re-construction or destruction. No choice but to find a hotel sandwiched between dust and chaos and noise. Good start. One plus point was that because there were so few tourists on the island, prices were rock-bottom. However, it was cold, particularly at night and the locals seemed down-right depressed as it was low-season. There was just no atmosphere, so the next day I decided not to waste time going on a (quite expensive) two-day tour of the bay, a decision I have come to regret as many people I met since had said that it was fantastic to see despite the cacky weather. Instead, I decided to take a motorbike to the opposite end of the island where the bay begins and take a look from there - a kind of poor substitute, but I had a whole day to fill before getting the return boat to Haiphong. 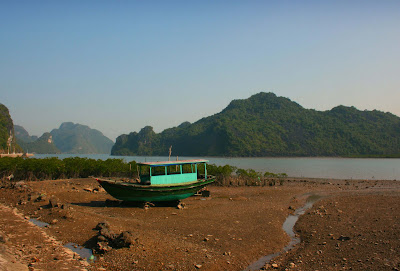 North end of Cat Ba island, on the road to the jetty
It was on this bike journey that I first met two fun French travellers Pierre et Eric (not very French-sounding names I must admit). Their bike had a puncture so I offered them a lift back to town (three people on a 100cc bike is very common in these parts, often with a goat or chihuahua in the front basket and a small child on the handle bars) but they proudly and politely declined. They too, like many of the few tourists on Cat Ba had decided against the Bay trip and were killing time riding around the island's national park which is stunningly beautiful and home to an endangered type of monkey called a langur (though you aren't actually going to see one). Rice paddies terrace the undulating hillsides dotted with tiny villages where the kids run out to shout a cheery 'hello!' to you as you drive past and folk going about their daily lives working the earth to scrape a living (around US$3-4 a day). 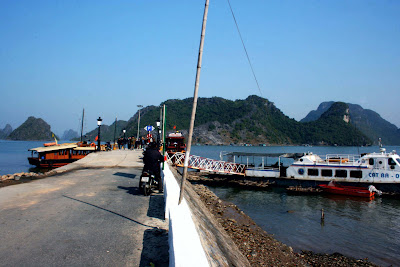 Cat Ba's northern jetty with Halong Bay in the distance
Five miles from the north jetty which overlooks the Bay, a school kid, walking along the road in the midday sun, flagged me down and pointed to the back seat of my bike. Slightly apprehensively, I let him on and soon began to think, were this back home, I'd be arrested instantly as a suspected child molestor. Sad eh? However, this is Asia, and people aren't that paranoid out here, and that's a good thing. The kids have no pretences, whereas the older generations out here can be a bit hesitant towards westerners (and rightly so, we have a historical habit of fucking them over). At the jetty, he jumped off and said 'thankyou' in English which took me a little by surprise but it was my first inkling that Vietnam really isn't such a hostile country, despite the relentless daily traumas that go with being a western traveller there.

The return boat journey was similarly cold and cramped, however, the bus journey from Haiphong to Hanoi was quite pleasant as I got chatting to the educated Vietnamese guy, Thanh, who was sat next to me. He was into photography and expensive lenses and enjoyed showing me his photos of his travels around Vietnam on his laptop, including Halong Bay. It looks great, and I decided then that I really needed to put a bit more effort (and cash) in if I was going to really experience as much as possible.
Posted by Kris Ridley at 2:22 AM 1 comment: 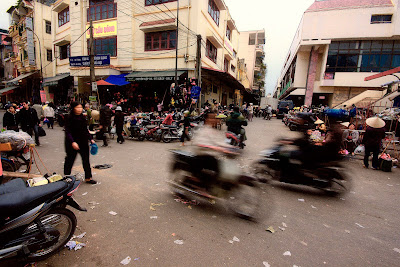 Yer average street in Hanoi
Ok, so it would have been a good idea to start this blog thing three and half months ago so I apologise for the catching up. Scratching my head trying to remember what has happened (where's the paracetomol?)... 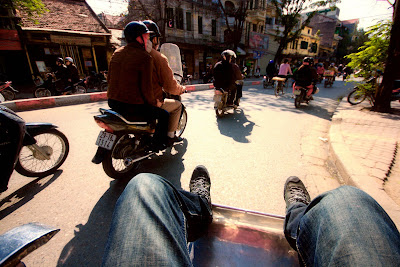 Taking a 'cyclo' ride around the Old Quarter
So, after a quick stopover in Bangkok, I landed in Hanoi on the 5th January 2009. Expecting the usual asian welcome to westerners of constant harrassment for tuk-tuks, moto-rickshaws, ganja and ladies of the night (or anytime of day for that matter) I wasn't dissappointed by Hanoi's communist red carpet. However, I wasn't expecting it to be so cold, having wisely only packed 3 t-shirts, one pair of jeans and one pair of shorts. A quick wander around the Old Quarter and a trip to the Temple of Literature and I was beginning to wonder if there was something I was missing. So, time to integrate asap. 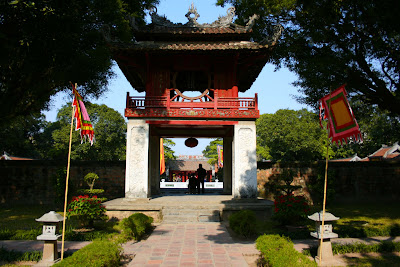 The Temple of Literature - solace in chaos
The first night set the precedent for many of my jaunts around Vietnam. Meandering around several vacuous bars and the odd amusing bia hoi stall (essentially a collection of tiny plastic chairs selling watered-down, cheap-as-chips beer) I eventually arrived at Mao's Red Lounge as recommended by a certain travel guide book which is perhaps the only place in Hanoi where interesting people imbibe. A warm red glow and some mostly good music combined with chinese-esque furnishings and comfy sofas was a welcome retreat to the cold night outside. The proprietor, Mao, was a good midget of a character sporting a rambo-bandanner, and he introduced me to various expats, travellers, english teachers and loafers (the names of whom I can't remember). Due to the midnight curfew imposed by the stoic Hanoian police force, every bar gets emptied by 12.30am. Fortunately, Mao knew some lock-in bars (a secret knock being the key), and after ten games of pool and nearly as many beers, at 5.00am I eventually decided it was time to try and find my hotel. After taking a full mile lap of Hoan Kiem Lake in the wrong direction (whilst observing the strange early morning ritual of reverse walking partaken by the elderly citizens of Hanoi) and Britishly declining several dubious offers for 'company' by sluts on mopeds, I made it back to my den. The next afternoon, hangover number 1 was in full force and kept me bed ridden till 3pm. Had I really come this far for this...?! 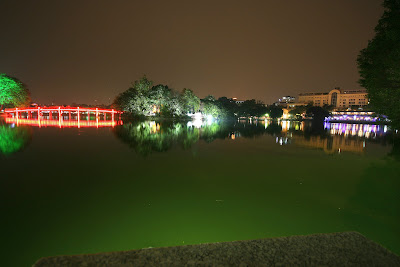 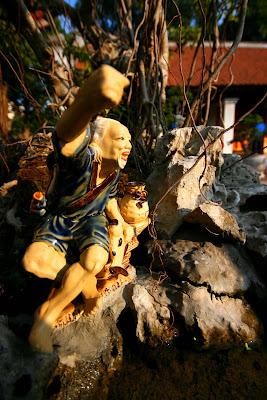 A chinese porcelain dude clearly missing his beer (T of L)
Posted by Kris Ridley at 6:29 AM No comments:

Battered and bruised after climbing Mt Kinabalu in Malaysian Borneo. So, i thought I would setup a photoblog... 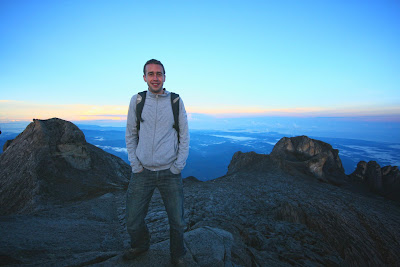 Whilst killing time in Sandakan, Malaysian Borneo, and trying not to move too much after yesterday's climbing fun I thought I would setup a photoblog. Since 5th January 2009 I have been travelling through SE Asia covering Vietnam, Cambodia, Laos, a quick tickle round northern Thailand, down to Peninsular Malaysia and now in Borneo Malaysia. Although I have been posting my photos on Facebook, I've been told by many that it's hightime I had a better platform for displaying my photographs. It's going to take some time what with the dodgy connections out here so please bear with me whilst I get it up and running, uploading the best of the retrospective stuff from previous months and also my favourite skydiving photos. In the meantime, here's me at Low's Peak at the summit of Mount Kinabalu, 4095m (13,435ft) A.S.L at 6am, Thursday 16th April 2009, taken by my climbing-buddy Lola (still can't get that song out of my head!).
Posted by Kris Ridley at 11:05 PM 2 comments: